Posted on November 9, 2013 by chrismacgowan 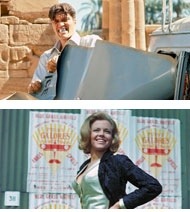 Richard played the formidable steel mouthed Bond villain Jaws, and starred in the 1977 The Spy Who Loved Me and 1979 Moonraker James Bond films. He will be joined by British actress Honor Blackman, who played Pussy Galore in the 1964 film Goldfinger. In the film Galore led an all-female aerial acrobatic troupe that served as cover for various illegal activities.

Visitors to Beaulieu will be able to find Richard and Honor on the ground floor area of the BOND IN MOTION exhibition, inside the National Motor Museum for periods between 10.30am and 4.00pm on November 30th and December 1st.

Richard will be selling copies of his book, ‘Making It Big in the Movies’, and both he and Honor will have official photographs available for sale on the day. They will happily sign any purchases and then pose for a photograph with you, so don’t forget to bring your camera.

This opportunity is included in your general admission to Beaulieu, an all inclusive ticket covering the National Motor Museum, BOND IN MOTION, World of Top Gear, Palace House and gardens and Beaulieu Abbey. Advance General Admission Tickets are available from our online ticket shop. Buy in advance of the day and receive a 10% discount.

Please be aware, Richard’s visit in May was very popular and you may need to queue in order to meet him and Honor. We will do everything possible to help the queue move as quickly as possible, whilst ensuring Richard and Honor have the opportunity to meet and speak to their fans, which they enjoy doing!

Time is running out…