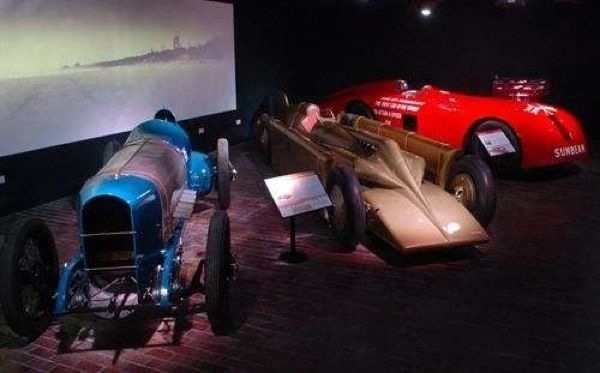 Four of the National Motor Museum’s iconic Land Speed Record cars, the 350hp and 1,000hp Sunbeams, Golden Arrow and Bluebird CN7, which reflect the success of British record-breakers between the 1920s and 1960s, feature in an inspiring new multi-media display For Britain & For The Hell Of It, was opened by Don Wales, grandson of Sir Malcolm Campbell.

In opening the display Mr Wales said: “The 116 year history of Land Speed Records has been dominated by the British. The record has been broken 57 times, 26 by a Briton and 8 by a Campbell. My uncle, Donald, broke the Land and Sea record in the same year – a unique double that has never been equalled. British Land Speed Record cars are an important part of our heritage and need to be on show for the public to see. It is also vital that the skills required to keep them going is kept alive.”

British drivers, engineers, mechanics and cars have broken the World Land Speed Record more times than any other nationality. Their story is brought to life in a moving audio-visual presentation, accompanied by items from the museum’s Collections, on public display for the first time. Exhibits include contemporary souvenirs and memorabilia, trophies and personal items belonging to the drivers. The display transports you back to a time of invention, courage and patriotism and also introduces you to those who are keeping Britain’s record breaking dream alive today.

In the 1920s, the 350hp Sunbeam – a new kind of car for a new era – was the first powered by an aero engine. Its drivers too, were men of the age – Kenelm Lee Guinness, who took the record in 1922, and Capt. Malcolm Campbell who, having remodelled the car several times, flew through the record twice, breaking the 150mph barrier in 1925 at Pendine Sands, Wales. In the dawn of a golden age of speed, the Brits had truly arrived.

As the 1920s accelerated, so did the speed and the 1,000hp Sunbeam really made the Twenties roar. At the wheel, sandwiched between the front and rear engines, Major Henry Segrave cruised through 200mph at Daytona Beach, Florida – the first person ever to travel at that speed on land.

In 1929 the iconic blend of style and engineering in the Irving Napier Special, Golden Arrow, with its distinctive engine shape, paved the way for two decades of unbroken British success. At 231.446mph, with Segrave again in the driving seat, this arrow shattered its target.

In 1964, a new Campbell – Donald – son of Malcolm, set the record in Bluebird CN7. A first record attempt at Bonneville in 1960 met with disaster when Bluebird, caught by a gust of wind, veered off course and somersaulted. With Bluebird re-built and a tailfin added for stability, his last attempt on the record, at Lake Eyre, Australia, propelled a triumphant Campbell through the elusive 400 to claim the official wheel-driven record for Britain at 403.10mph.

An unofficial record of 407mph set by Craig Breedlove in a jet powered car the previous year was against International rules. However, Breedlove’s faster jet-car run had proved that the old rules would have to be rewritten. It was the end of a glorious era for the Campbells, Bluebird cars and for Britain.

While, over succeeding decades, new records have continued to be set, a reviving interest in electric, steam and alternative fuel records has been growing. Accompanying the Land Speed Record display, the museum’s new exhibition of alternative Land Speed vehicles includes the nitromethane fuelled Commuter Dragster, the very first All American fuel Dragster to be built and run in Britain and the first to break the magic 200mph barrier over the standing start quarter mile. Also displayed are the Bluebird Electric, in which Don Wales set a new speed record for an electric car of 137.15mph at Pendine Sands in 2000 and the British Steam Car Inspiration – the fastest ‘kettle’ in the world – in which he achieved 139.843mph at Edwards Air Force base, California, in 2009.

Speaking on behalf of his father, Lord Montagu, the Hon Ralph Montagu said: “It is very fitting that we are opening the display this year as 2014 celebrates the 85th anniversary of Henry Segrave setting a new world Land Speed Record in Golden Arrow in 1929. And fifty years ago, in 1964, Donald Campbell achieved over 400mph in Bluebird CN7 at Lake Eyre.”

The Land Speed Record display and exhibition is now open and can be seen as part of a visit to the whole Beaulieu attraction, which includes the National Motor Museum, World of Top Gear, Beaulieu Abbey, Palace House and gardens.