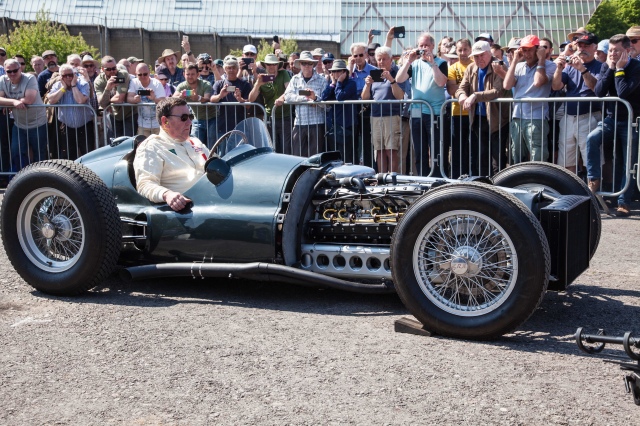 Chief Engineer and National Motor Museum Manager Doug Hill took to the wheel of the iconic British Formula One racing car for the octane-fuelled spectacle, which also marked the launch of limited edition timepieces created from the BRM’s original pistons. For more details of the Swiss-made clocks which replicate the BMR’s oil pressure gauge email BRMClock@beaulieu.co.uk or see www.nationalmotormuseum.org.uk/support-us/brm-timepieces.

In an emotional reunion with the BRM, 77-year-old visitor Tony Draper travelled from his home in Yorkshire to see it for the first time since childhood. His father worked on the car as an engineer for BRM and Tony treasures a picture of himself taken with the BRM nearly 70 years ago.

As many as 15,132 visitors and 2,905 exhibitors enjoyed the scorching sunshine across the Spring Autojumble weekend on May 19th and 20th.

Beaulieu Events Manager Judith Maddox said: “We really couldn’t have asked for better weather. The sunshine was perfect for the start-up of the BRM, which was certainly one of the highlights of the show, and visitors loved the sight and sound of this incredible racing car. Also very memorable was MoggyFest and Friends, with a great mix of cars, antiques and vintage fashions on display.”

MoggyFest and Friends was a crowd-pleaser brought together by the Dorset Branch of the Morris Minor Owners’ Club to celebrate the 70th anniversary of the Morris Minor. Around 300 Morris Minors and contemporary classics offered a colourful show of saloons, Travellers, vans, pick-ups and convertibles. A birthday cake was cut by Beaulieu’s Managing Director Russell Bowman, who also presented commemorative glasses to club members.

At the heart of the display was a timeline representing each decade of Morris Minor’s production run from the 1940s to 1970s, featuring immaculate cars such as one of the oldest surviving ‘lowlight’ Minors from the first production year in 1948 and one of the last Morris Minor Royal Mail vans. Complementing the cars were period-perfect antiques, record players, toys, kitchen appliances and bicycles, while the owners dressed up in trilby hats with waistcoats or hippy outfits with wigs and bright coloured flares.

The displays continued with a range of classic and prestige cars owned by members of the Wessex Car Club, while Morgan Sports Car Club showcased a great selection of the hand-built British sports cars.

Overflowing with automotive treasures were 1,143 stands offering everything from boxes of light lenses and door handles for £1 to Ford Escort panels, Hillman Hunter engines and even a part-restored Austin Seven saloon project.

The Best Stand trophy, donated by Lolly Lee in memory of her father and autojumbler Terry Lee, was awarded to friends Fiona and Ian Shaw, and Adrian and Jacqueline Carter, who decorated their combined stand spaces with a Royal wedding theme complete with bunting, flags and pictures of the Royal family. The stand was selected by judge Practical Classics Editor Danny Hopkins for embodying the spirit of the event. They were presented with a trophy by Lolly and Beaulieu Commercial Director Stephen Munn.

Fiona said: “It’s been a very emotional day and I can’t believe that we’ve won this award. We have been streaming the wedding to watch it live over the internet.”

Selling British tool kits and parts for Jaguars and Minis, the couples were helped on the stand by Adrian’s and Jacqueline’s daughter Olivia. Jacqueline said: “We’ve been coming every year for over 25 years, ever since Olivia was just six-months-old.”

Sunday’s highlights included Land Rover Rummage, with a trading field dedicated to spares for the popular 4×4. Windscreens, wheels, transmissions, roof panels, body tubs and even a complete military Land Rover project were for up for grabs. The Solent and District Land Rover Club put together a line-up of seven Land Rovers that had been modified for serious off-road terrain.

At the close of the show was the Walkabout Auction, hosted by guest auctioneer Danny Hopkins. Bargain hunters bid over items as varied as pink steering wheel covers, a Reliant Robin bonnet and Triumph Herald rubber bumper caps.