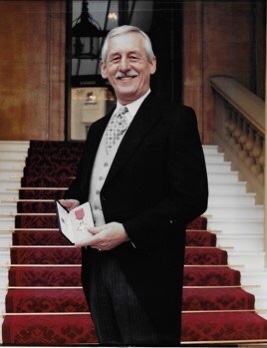 The 81-year-old passed away at home surrounded by his wife and family. He had been suffering from Alzheimers for a number of years.

After leaving school, he joined the Northern Drama School where one of his first roles was in the York Mystery Plays with Dame Judi Dench.

He then spent several years treading the boards, in children’s theatre and in weekly rep.  He had a part in the Mousetrap when it was first on the London Stage and then went into TV with parts in Emergency Ward 10 and the Army Game.

Acting was his first love but he made the decision to hand in his Equity Card when his first wife Ann became pregnant.

Realising he needed to start earning regular money he went to work for Heinz and after a time in production he then went on to become part of the sales team.

From there Geoffrey moved to the oil industry and worked for Texaco.  So disgusted was he at the treatment of petrol site tenants that he decided to start up a Trade Association – The Petrol Retailers Association – in conjunction with Les Ward.

He made his mark in this sector and organised a mass rally of petrol tankers to drive into London and present a petition to Government.

So successful was this that along with others his involvement finally saw the introduction of Government legislation to finally outlaw the restrictive trade practices of the major fuel retailers.

The PRA was then absorbed into the Motor Agents Association (now the Retail Motor Industry Federation) and following a year with the organisation he was approached to become the CEO of Ben, where he stayed for the remainder of his career, retiring at the age of 65 having served for 25 years.

He was responsible for starting to provide specialist care for young disabled people from the industry alongside Alzheimer’s care units in two of the four nursing and residential centres.

In conjunction with the then director of Welfare he set up the first industry day care centre at Peugeot in Coventry and the centre continues to thrive.

His leadership proved to be invaluable when the 1990 recession hit and he persuaded each member of staff to take a 5% pay cut, led by himself and also to volunteer to give five hours each week in the centres.

By the time I arrived at the Retail Motor Industry Federation where I was Chief Executive from 1995 to 1999 the Petrol Retailers Association was already part of it and Geoffrey was well installed at BEN and was working his magic. I was soon to join the BEN board of trustees and worked with Geoffrey for many years. He was inspirational, highly individualistic and attracted huge loyalty from everyone around him.

Running a charity is no easy task but Geoffrey attracted support from the industry and it was with some pride he was able to say that the automotive industry had its own bespoke charity – not many sectors do – and that it was something we should be proud of and nurture. Also, unlike some charities that struggle to keep going, BEN has gone from strength to strength over the years, changing with the needs of the industry and delivering what is required in today’s world.

Geoffrey had many other interests. He was a very good photographer, an accomplished actor and as with everything he did, a sense of urgency and a can do attitude made things happen.

He was a delight and I value our relationship. Geoffrey would be horrified if I fell into the trap in this short tribute of only saying true but nice things about him. In getting things done he was capable of being acerbic (forthright) and direct (blunt) but anyone who knew him realised this was a means to an end; the end game was always helping people in the automotive industry who needed help.